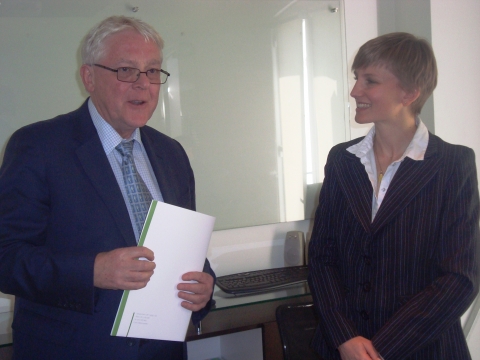 On 11March ICPS was delighted to receive a visit from Ana Maria Morales Peillard, Director of Justice and Reintegration, Fundacion Paz Ciudadana, and Alejandro Arevalo, Head of the Human Rights Unit at the Gendarmeria de Chile.

Discussions were held on issues concerning social exclusion and prisoner reintegration, followed by a meeting with ICPS Trustee Baroness Vivien Stern at the House of Lords.

The visit followed a trip to Chile by the ICPS Director, Peter Bennett, in October 2013 during which he met with the Chilean Minister of Justice, visited prisons in Santiago and gave a presentation at an International Congress on Human Rights and Good Practices in Prisons organised by the Gendarmeria de Chile.

ICPS and the Fundacion Paz Ciudadana, a not-for-profit organisation focusing on the prevention and reduction of crime, have signed a Cooperation Agreement to share information, research and initiatives on prison reform.