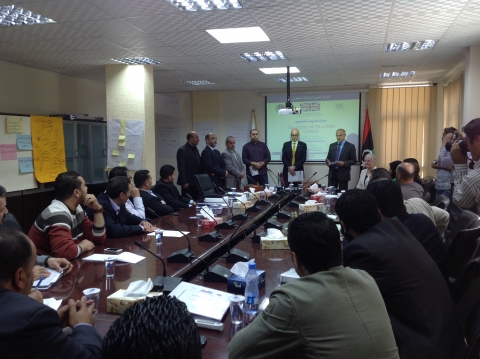 ICPS Associates Dr Shane Bryans and Christine Fisher, supported by their interpreter Walid Safar, delivered a Training of Trainers course for Libyan Judicial Police staff between the 29 March and 3 April 2014. The course was part of a programme of support for the Judicial Police funded by the UK Security, Justice and Defence Programme in Libya.

The six day course provided the 18 participants with core training skills, tools and techniques. All participants received a Trainers’ Handbook, the ICPS Handbook ‘A Human Rights Approach to Prison Management’ and a training manual containing speaking notes, PowerPoint slides and handouts, all in Arabic. Following the course, participants will form five training teams and deliver a five day course on ‘Working in Prisons in Libya – A Human Rights Approach’ to all Judicial Police staff currently working Libyan prisons.

The photograph above shows HM Ambassador, Michael Aron, making a speech to the participants at the end of the course. The Director General of the Judicial Police and Director of Judicial Police training attended the closing ceremony and are also shown in the photograph.