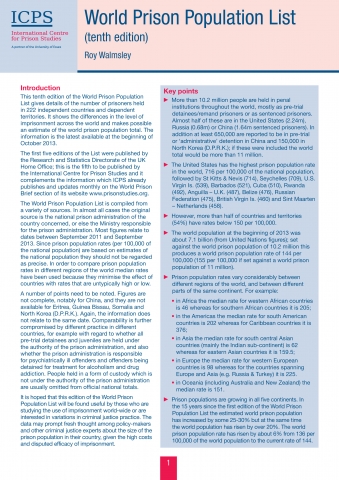 The report can be downloaded here

It is of grave concern that there are now over 10.2 million men, women and children held in penal institutions throughout the world. What is of graver concern is that the world prison population continues to rise, despite the fact that imprisonment is a highly expensive option for governments, as well as being inappropriate and ineffective for the majority of prisoners who come from minority and marginalised groups, or who are mentally ill or who are alcohol and drug abusers.

The International Centre for Prison Studies calls on those governments with high or rising rates of imprisonment to reduce their prison populations and to seek alternatives to custody in the interests of good economy, effectiveness in sentencing and the achievement of internationally agreed standards.