More than 10.35 million people are in prison around the world, new report shows. 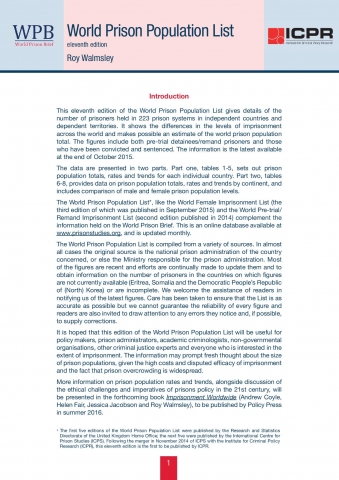 More than 10.35 million people are in prison around the world, new report published by the Institute for Criminal Policy Research shows.

More than 10.35 million people are held in penal institutions throughout the world according to the latest edition of the World Prison Population List (WPPL), researched and compiled by Roy Walmsley and published on Wednesday 3 February by the Institute for Criminal Policy Research, at Birkbeck, University of London. Including the numbers reported to be held in detention centres in China and in prison camps in North Korea, the total may well be in excess of 11 million.

The report is available here

The WPPL provides up-to-date information on the global prison population and the rate per 100,000 of the national population in 223 countries and territories. Figures are unavailable for only three countries – Eritrea, North Korea and Somalia.

The world prison population rate, based on United Nations estimates of national population levels, is 144 per 100,000.

•           in Europe the median rate for western European countries is 84 whereas for the countries spanning Europe and Asia (e.g. Russia and Turkey) it is 236.

Since about the year 2000 the world prison population total has grown by almost 20%, which is slightly above the estimated 18% increase in the world’s general population over the same period.

The female total has increased proportionately more than the male total in every continent. Consequently the proportion of women and girls in the total world prison population has risen from 5.4% in about 2000 to 6.8% in the latest figures available.

More information on prison population rates and trends, alongside discussion of the ethical challenges and imperatives of prisons policy in the 21st century, will be presented in the forthcoming book Imprisonment Worldwide (Andrew Coyle, Helen Fair, Jessica Jacobson and Roy Walmsley), to be published by Policy Press in summer 2016.

It is of great concern that there are now over 10.35 million people held in penal institutions throughout the world. What is of greater concern is that the world prison population continues to rise, and to rise very sharply in some parts of the world. This should prompt policy makers in all countries to consider what they can do to limit the numbers in custody, given the high costs and disputed efficacy of imprisonment and the fact that prison overcrowding is widespread. The disproportionate rise in the female prison population is particularly shocking.

This latest edition of the World Prison Population List reveals the size of the worldwide prison population, and how widely prison population rates and trends vary between regions and countries.  Politicians and policy-makers in much of the world are now recognising that continued growth in prison populations simply cannot be sustained. We hope that states and international organisations will work together to reverse this growth and to help to build safer societies through more appropriate use of custody and wider use of its alternatives.