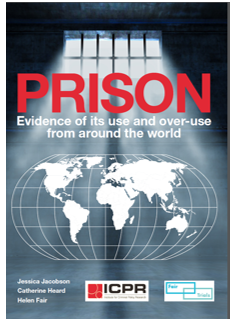 Overcrowding, inhumane and degrading detention conditions and disproportionate harm to marginalised groups are some of the consequences of the rapid, unrelenting growth of imprisonment worldwide, according to Prison: Evidence of its use and over-use from around the world, published today [16 March] by the Institute for Criminal Policy Research (ICPR), Birkbeck, University of London, and the NGO, Fair Trials.

The report can be downloaded here

The report, by Jessica Jacobson, Catherine Heard and Helen Fair, draws on ICPR’s unique World Prison Brief database and describes patterns and trends in imprisonment in ten contrasting countries across all five continents. Each of the ten countries has a different story to tell about its use of imprisonment:

In much of the world, recent decades have seen rapid, unrelenting growth in use of imprisonment. Today, the global prison population far exceeds 10 million.

The causes of prison population growth are complex, but many of the consequences are clear. They include:

All ten of the countries have experienced the negative effects of over-use of imprisonment, and all have lessons to impart about what issues need to be tackled if prisoner numbers are to come down – and stay down. The report concludes by considering how workable strategies could be developed for curbing the resort to imprisonment. It is clear, however, that just as there is no single explanation for prison population growth, so too is there no single route towards effective reform. And if reform is to be achieved, it is necessary to address, as a matter of urgency, the questions: what are the purposes of imprisonment as a response to crime; and could these purposes be better achieved in some other way?

This report is the first output of a wider research and policy project that will look more closely at ‘the custody journey’ in contrasting jurisdictions. The project will enrich the data presented in this report by mapping the many, varied and interwoven factors driving up prison populations worldwide and by exploring ways of reversing these trends. It will also draw on real cases to understand people’s lived experience of criminal justice systems.

Catherine Heard, Director of ICPR’s World Prison Research Programme and one of the authors of the report, said:

These countries each have unique stories to tell about the use of imprisonment – and the harms associated with its over-use. Two things emerge. First, it is not only – or even mainly – a country’s crime rate that dictates how many people are in prison. A wide array of political, economic and social factors also help to determine the size and make-up of prisoner populations.  Secondly, when prisons cannot keep pace with the ever-growing demands placed on them, they are less able to reform or rehabilitate and more likely to cause further damage.

This report offers an intriguing insight into the very different approaches countries take in terms of whom they imprison and why. With incarceration levels rising rapidly, making prisons dangerous, inhumane places for inmates and staff alike, it matters that we understand the many and varied factors at work here. This report provides a roadmap towards understanding what drives the over-use of imprisonment – and where solutions might lie.