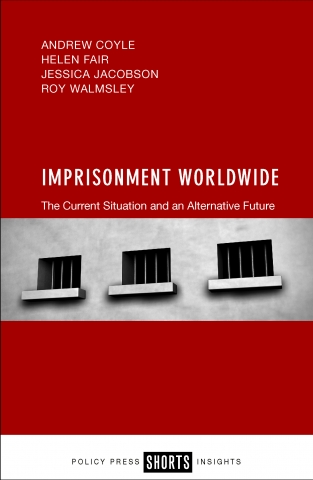 Important new publication proposes radical re-think on the use of imprisonment worldwide and offers alternative model for the future.

This book by authors Andrew Coyle, Helen Fair, Jessica Jacobson and Roy Walmsley of the Institute for Criminal Policy Research at Birkbeck, University of London, provides a comprehensive account of prison populations around the world and analyses recent trends in the use of imprisonment.

The authors – members of the Institute for Criminal Policy Research (ICPR), at Birkbeck, University of London – lay out the following central conclusion:

The significant increase in the use of imprisonment in recent decades is due in no small part to the manner in which criminal justice systems in many countries are used as a response to wider social and economic problems, particularly drug abuse and mental illness. Despite their best efforts prisons are singularly ill-equipped to deal with these problems.

In 2015 the United Nations agreed a set of Sustainable Development Goals intended to improve the quality of life for citizens in all countries. These goals deal with issues such as poverty, hunger, health, education, equality and productive employment. They also identify the need for justice systems to be part of this human development model. This will have important implications for the way that criminal justice systems operate and specifically for the way that imprisonment is used.

The book draws on the data in the World Prison Brief – a unique online data-base produced by the ICPR containing information on prison systems throughout the world – and the authors’ long experience of research, policy and practice in the field, to provide wide-ranging, up-to-date facts and figures on prison populations worldwide, such as:

Director of the Institute for Criminal Policy Research at Birkbeck, University of London, and co-author of the book, Dr Jessica Jacobson, said:

“This book tells the story of the growing worldwide prison population. We see that many countries have vastly increased their dependence on imprisonment in recent decades: to the point that there are well over 10 million prisoners across the globe today, of whom a small but rapidly rising proportion are women.

“But the book also demonstrates that there’s nothing inevitable about prison population growth. As the huge economic and social costs of mass incarceration become ever clearer, policies to contain and reduce prisoner numbers are gaining ground in many parts of the world.”

Commenting on the many uses of the book, Professor Andrew Coyle, Emeritus Professor of Prison Studies, University of London, and co-author of the book added: “Imprisonment Worldwide is intended to provoke thought and discussion and will be of great interest to all who are currently engaged in debate about prisons, the use of imprisonment and a possible alternative model.”