Pre-trial detention and its over-use: Evidence from ten countries 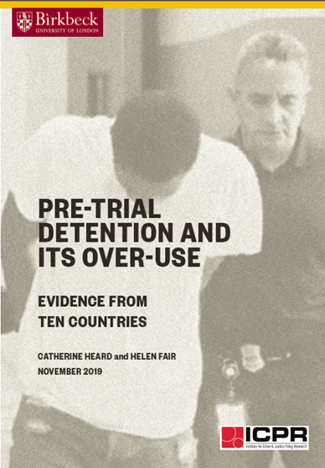 A new report, Pre-trial detention and its over-use: Evidence from ten countries, is published today by the Institute for Crime & Justice Policy Research (ICPR), at Birkbeck, University of London. The report was authored by Catherine Heard (Director of ICPR’s World Prison Research Programme) and ICPR Research Fellow Helen Fair. It examines policies and practices that can lead to the over-use of pre-trial detention and makes recommendations for reform.

The misuse of pre-trial imprisonment is a major, but preventable cause of prison overcrowding; and a severe infringement of fundamental rights. It causes economic and social harm, puts pressure on prison conditions and increases the risk of crime. Pre-trial detention statistics held on ICPR’s World Prison Brief database show that, since 2000, pre-trial prison populations have grown substantially across much of the world. This is despite increased availability of cheaper, less restrictive measures like electronic monitoring.

This new report looks at pre-trial detention in ten jurisdictions: Kenya, South Africa, Brazil, the USA, India, Thailand, England & Wales, Hungary, the Netherlands and Australia. All but one of these (the Netherlands) currently run their prison systems over-capacity. The research included analysis of national legal systems followed by interviews with 60 experienced criminal defence lawyers across the ten countries. The research found:

Catherine Heard, Director of ICPR’s World Prison Research Programme and the author of the report, said:

‘All over the world pre-trial detainees are being held for months or years in prison, waiting for their cases to reach trial or final sentence. The needless use of pre-trial imprisonment carries huge social and human costs and is fueling unprecedented prison population growth and prison overcrowding. There are cheaper, less restrictive ways of ensuring someone turns up to court – and governments serious about safety and justice must now prioritize their use.’

The full report can be found here