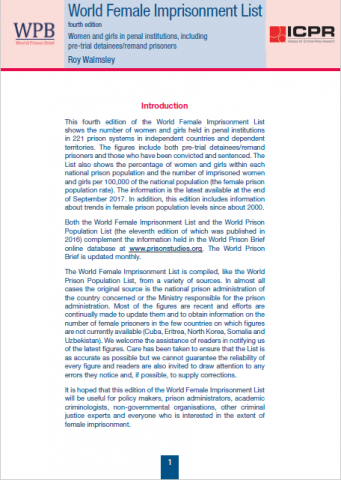 More than 714,000 women and girls are in prison around the world, new report published by the Institute for Criminal Policy Research shows.

More than 714,000 women and girls are held in penal institutions throughout the world, according to the fourth edition of the World Female Imprisonment List, researched and compiled by Roy Walmsley and published by the Institute for Criminal Policy Research at Birkbeck, University of London.

The report can be found here

The number of women and girls in prison worldwide has increased by more than 50% since about the year 2000. This cannot be explained in terms of the growth in national population levels: United Nations figures for the world population indicate that this rose only by 21% in about the same period.

The number of women and girls in prison has risen particularly sharply in some countries since around 2000; notably in:

The latest data on female imprisonment are a cause for concern. Numbers of women and girls imprisoned worldwide are rising at a rate that far outstrips increases in male prisoner numbers. This is the case in every continent, with increases reported in both developed and less developed countries. Women and girls in prison are a vulnerable and disadvantaged group and tend to be victims of crime and abuse themselves. Governments and prison administrations should be asking searching questions about the factors underlying these data and how they can address them.