World female prison population up by 60% since 2000 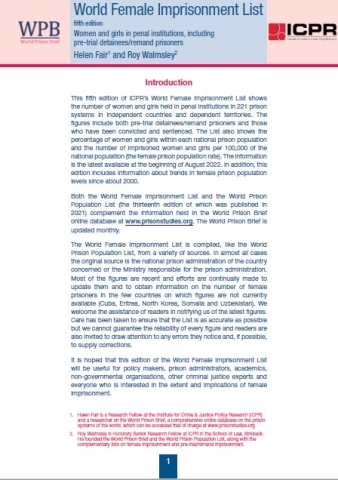 Prison population data reveal a much faster growth in female than male prisoner numbers since the year 2000. While the number of women and girls in prison has grown by almost 60%, the male prison population increased by around 22%.

This fifth edition of the World Female Imprisonment List, by Helen Fair and Roy Walmsley, shows that more than 740,000 women and girls are in prison globally.

The List is published by the Institute for Crime & Justice Policy Research (ICPR) at Birkbeck, University of London. The List provides information on the number and percentage of female prisoners in almost all countries across world. It also includes information about trends in female imprisonment in countries and regions and by continent.

The key findings from the report are:

The number of women and girls in prison has risen particularly sharply in some countries since around 2000; notably in:

The sustained and substantial rise in the numbers of women and girls in prison across much of the world is a cause of profound concern. It has long been recognised that most female prisoners are extremely vulnerable – with histories of poverty, mental illness and sexual and physical victimisation. Their incarceration makes little contribution to public safety, while imposing high financial and social costs. It is our hope that the data starkly presented in this World Female Imprisonment List will support and strengthen reformers’ calls to bring an end to unnecessary, damaging imprisonment of women and girls.

It is deeply troubling that the number of women and girls imprisoned worldwide has risen so dramatically in just two decades, far outstripping the rate of increase in male prisoner numbers. Huge increases have been seen in developed and less developed countries alike, with poverty, structural inequality, and the failed war on drugs the key underlying factors. Incarcerating more women for longer does nothing to address social injustice, simply causing further harm to those incarcerated, their families and communities.