nt decades have seen rapid and sustained growth in prisoner numbers around the globe, with the result that, today, over 11 million people are in prison worldwide. Of these 11+ million, more than three million are being held in pre-trial or other form of remand detention.

The causes of prison population growth are complex, but many of the consequences are clear: they include overcrowded prisons with inhumane and degrading conditions. According to their own official measures of capacity, most prison systems around the world are overcrowded – impacting mental and physical health, the safety of prisoners and staff alike, and prospects of rehabilitation. Among countries with some of the most overcrowded prisons are the Philippines (overall prison occupancy level of around 460%), Haiti (450%) and Guatemala (370%).

Over-use of imprisonment imposes enormous costs on the public purse, while disproportionately harming poor and marginalised groups in all societies. It also limits the capacity  of prison systems to deal effectively with the small minority of prisoners who pose serious risks to public safety.

Prison population numbers, rates and trends in our ten countries 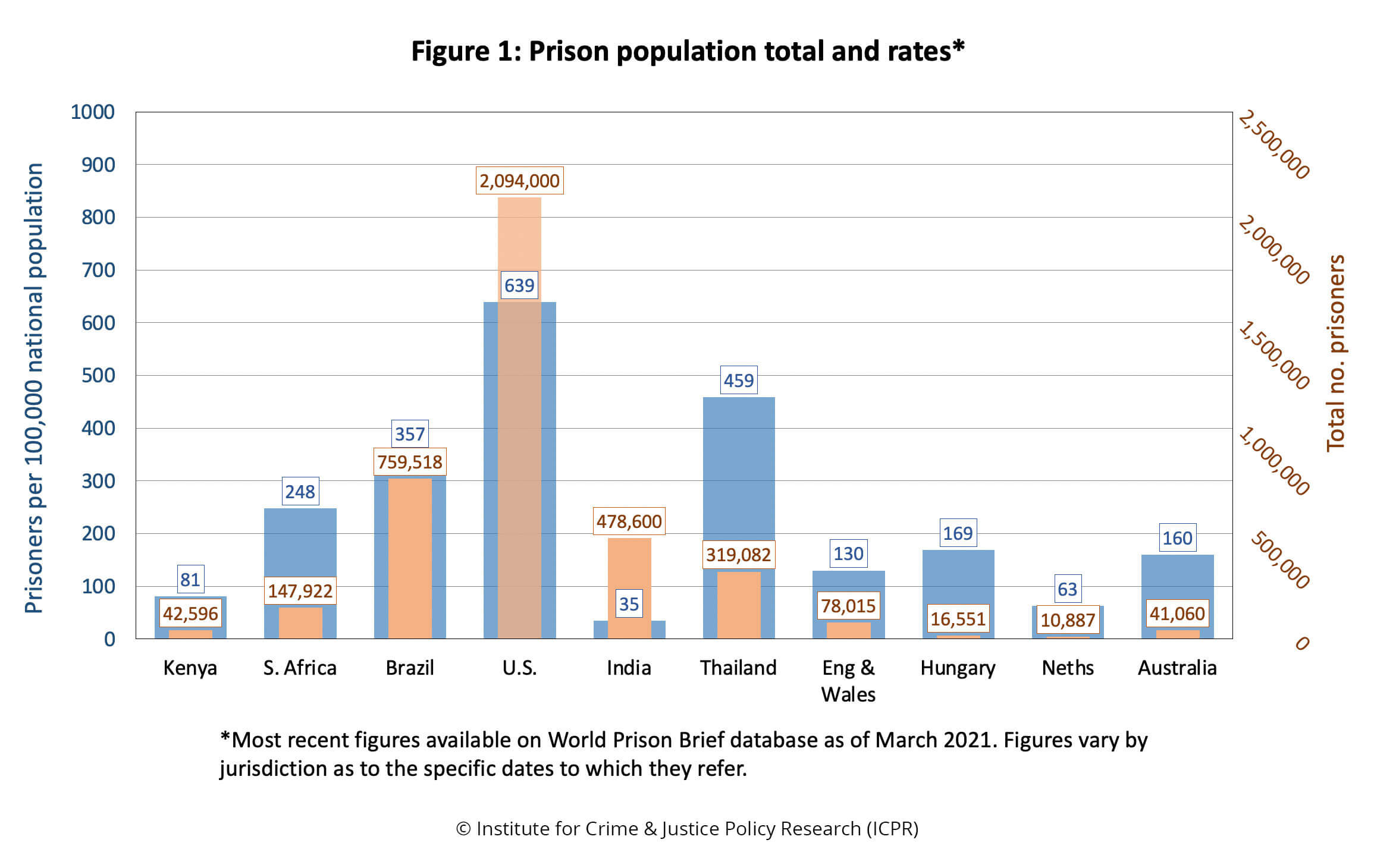 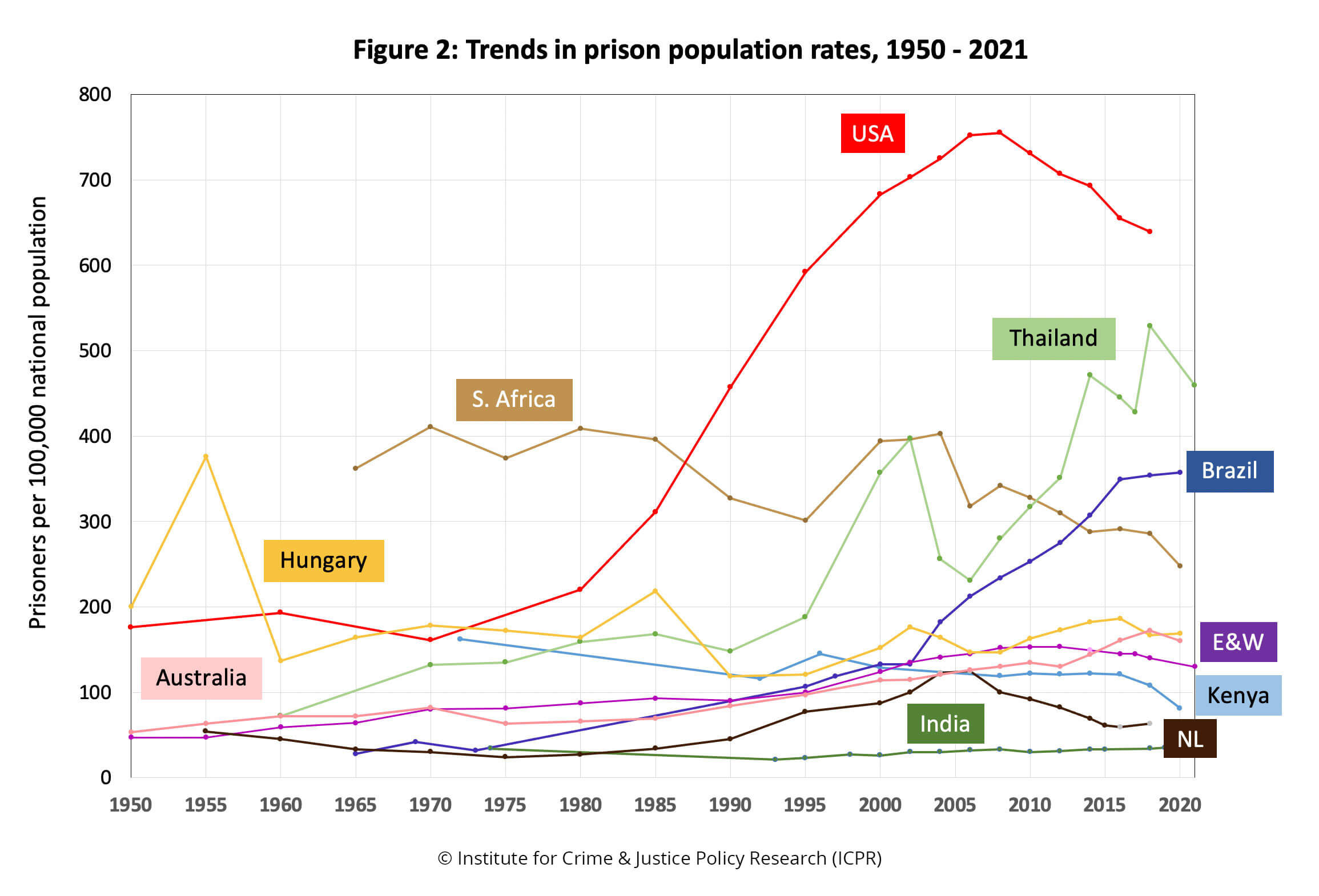 Understanding patterns and trends in imprisonment

As discussed in the first published output of the ten-country project, Prison: Evidence of its use and over-use from around the world, variation in prison population rates and trends cannot be explained with reference to a single set of causes. In any given jurisdiction at any given time, the size of the prison population is determined by wide array interlocking factors, as depicted in Figure 3. 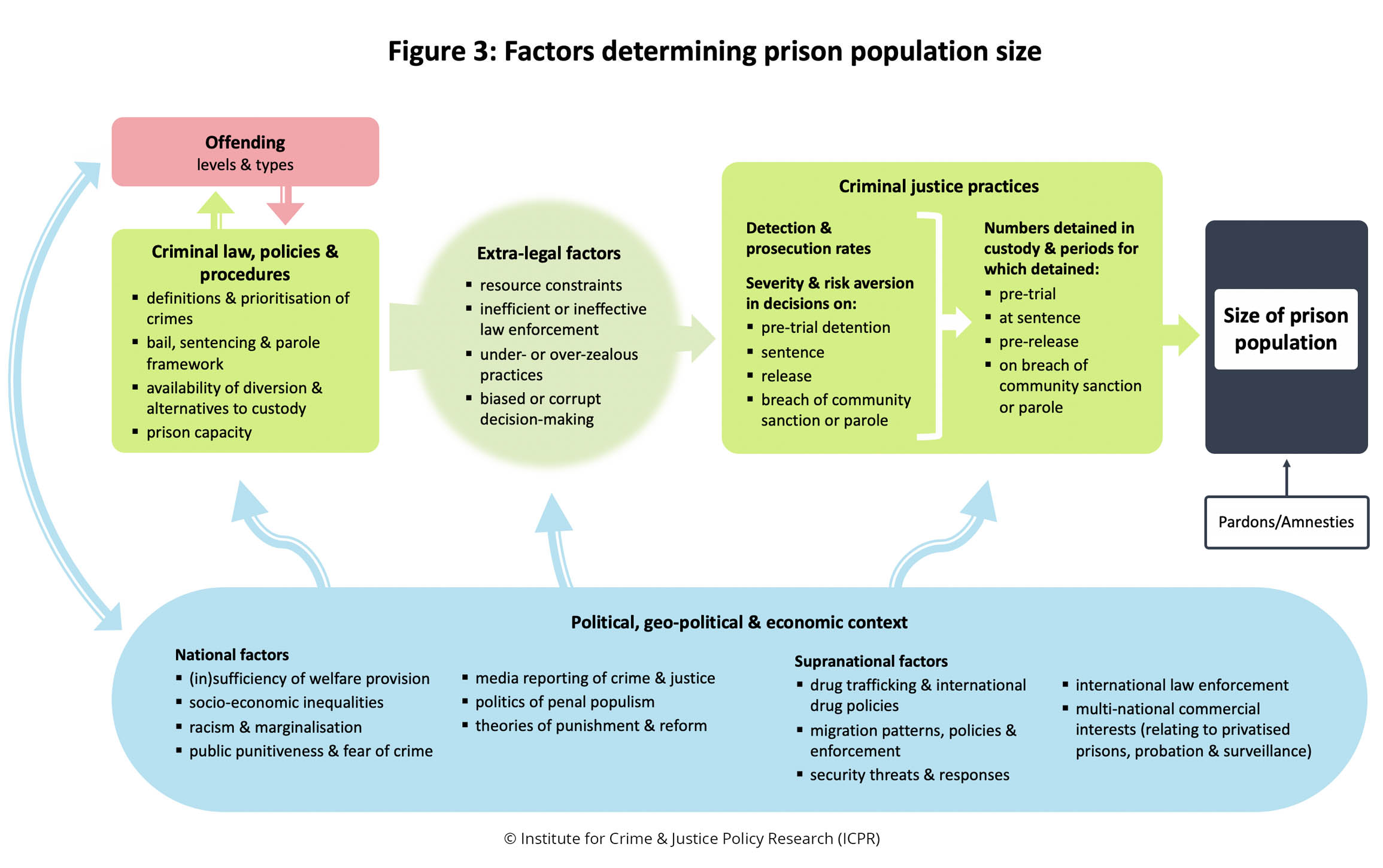 Factors which may lead to prison population growth over time include increasingly punitive public debate and political cultures; more sweeping definitions of 'criminal' behaviour; tougher enforcement; and changing patterns of crime. Such factors can conspire to increase the numbers of defendants coming before the courts, and the courts' resort to custody for those who are convicted. Higher rates of pre-trial detention are another manifestation of punitive penal policies, while also reflecting under-resourcing of, and bottle necks in, judicial processes.

While there are multiple factors that directly or indirectly promote greater use of imprisonment, so too there are moderating influences and downward pressures. In wealthy and impoverished countries alike, downward pressures include resource constraints, for the simple reason that prisons are expensive. There is growing recognition of imprisonment’s failings as a response to social problems, and that many of these problems are best tackled outside the realm of criminal justice. And whether overtly or covertly, and whether motivated by economic or other concerns, some states have made political choices to curb or reduce the use of imprisonment.

The Covid-19 pandemic has added to the pressures for penal reform and decarceration. When the pandemic was declared, some countries moved decisively to reduce prisoner numbers in order to minimise the health risks presented by overcrowded conditions. The extent to which such measures will be sustained remains to be seen.

Just as there is no single explanation for the widely varying trajectories of differing countries’ use of imprisonment, there is no single route towards effective reform. But it is clear that certain cross-cutting issues must be addressed if reform efforts are to have any success. Key strategic priorities include: