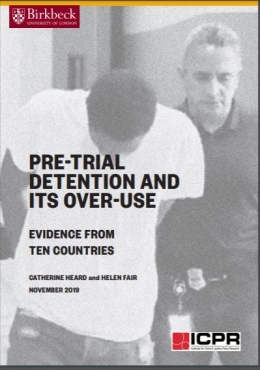 suse of pre-trial imprisonment – that is, detention of individuals prior to conviction or definitive sentencing – is a major, but preventable, cause of prison overcrowding; and a severe infringement of fundamental rights. Since 2000, pre-trial prison populations have grown substantially across much of the world. This is despite increased availability of cheaper, less restrictive measures like electronic monitoring.

In many countries, there is a gulf between law and practice relating to the use of pre-trial imprisonment. Although legal systems (in line with international standards) refer to pre-trial detention as an ‘exceptional measure’ it is, in practice, often the norm. The problem is rarely the law itself, but wider socio-economic and systemic factors that influence its (mis)application.

Our in-depth research – including interviews with over seventy experienced criminal lawyers – has helped explain why this ‘measure of last resort’ is so routinely over-used. Our recommendations for reform draw on the many insights from this research.

In many countries, people in pre-trial detention are held in overcrowded, cramped and insanitary conditions, at risk of mistreatment and violence. The conditions are often worse than for sentenced prisoners. Remand prisoners usually have no access to work, education or rehabilitation.

Defendants in custody may face greater pressures to confess or accept plea deals. Being in prison makes it harder to prepare a defence, consult lawyers or review prosecution evidence. All these factors increase the risk of miscarriages of justice.