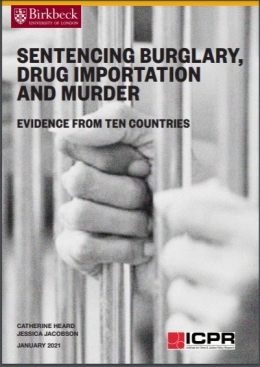 Recent decades have seen a marked trend towards tougher sentencing. Imprisonment has become an ever more available sanction, and prison terms are getting longer. Harsher sentencing is an obvious driver of higher levels of imprisonment, but has done nothing to tackle the underlying and complex causes of much (re-)offending.

There are vast disparities between countries in the sentences passed for the same conduct. These disparities show that, while all jurisdictions face similar dilemmas in relation to their citizens’ illegal behaviours, they make widely different policy choices in response.

Over 2 million of the world’s prisoners are detained in relation to drugs offences (including possession for personal use). Around a third of all women prisoners are detained because of a drug conviction. Many of these 2 million people will have played a minor, easily replaceable part, for little financial gain, within organised criminal networks; many will simply have been caught in possession of drugs for personal use.

Excessive use of imprisonment for drug offences has not deterred suppliers or prevented drug use, but has placed a huge burden on criminal justice systems. Punitive enforcement laws have exacerbated social and economic problems in communities affacted by high levels of poverty, unemployment and drug dependency.

Harsh sentencing laws are not, however, the universal response to drug offences. Support is growing for treatment-based interventions, whether within or outside the criminal justice system. Decriminalisation and more lenient penalties are now a feature of drugs policy in many parts of the world. Our recommendations for reforming the sentencing of drug offences are geared towards a more proportionate approach.

In almost every country, the law requires that offenders with previous convictions are sentenced more harshly than those without. The rationale is two-fold: repeat offenders are more culpable, having failed to respond to earlier sanctions; and they are more likely to re-offend, so a harsher sentence is needed to tackle that risk. This often means a prison sentence is imposed when, but for the previous history, a non-custodial sanction would have been used.

The evidence is that locking up repeat offenders has little positive impact on re-offending beyond the temporary incapacitative effect. Not only is it difficult in a prison setting to address the problems underlying entrenched re-offending, like drug dependency, but prison often raises the risk of re-offending, by leaving people with fewer options and less to lose. Our recommendations on sentencing people with previous convictions are geared towards a fairer, more realistic approach.

Short spells in prison destabilise lives but rarely offer any prospect of constructive intervention to address the causes of offending. They are frequently handed down as a response to repeat convictions. In countries with less provision for non-custodial sanctions, they are routinely used to punish even first-time offenders for less serious crimes, including petty offences. Sometimes people end up in prison for weeks or months simply because they cannot afford to pay a fine or hire a lawyer to defend them.

Our recommendations are designed to prevent disproportionate use of short prison terms, and create space for alternative approaches.

Around half a million of the world’s 11 million-plus prisoners are serving a life sentence of one form or another, meaning the state has the power to imprison them until death. In some countries, life imprisonment is a mandatory sentence for certain offences.

Use of life sentences has increased greatly in some countries in recent years, reflecting a rise in the number of offences for which life sentences are available – or mandated. This is largely a result of political law-and-order arms races. However, some countries, like Brazil, do not have life sentences. Others hardly ever use them: for example, in the Netherlands, someone convicted of murder would be more likely to receive a custodial sentence of up to twelve years, followed by a period of secure psychiatric treatment (if he is deemed to have a treatable condition).

Life sentences, particularly those imposed with excessive minimum terms or non-eligibility for parole, are widely seen as inhumane. Their mental health impact is severe, due to the uncertainty or impossibility of release and the associated sense of hopelessness. Our recommendations would reduce use of life sentences, remove mandatory life sentences, and ensure proportionality remains the overarching principle in the sentencing of the most serious offences including homicide.