More than 700,000 women and girls are in prison around the world, new report shows. 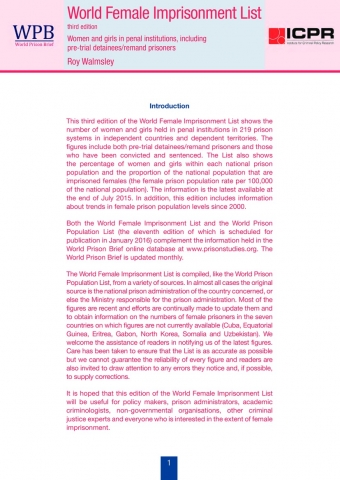 Over 700,000 women and girls in prison around the world, new report by Institute for Criminal Policy Research shows

More than 700,000 women and girls are held in penal institutions throughout the world, according to the third edition of the World Female Imprisonment List, researched and compiled by Roy Walmsley and published by the Institute for Criminal Policy Research at Birkbeck, University of London.

Female prisoners generally constitute between 2 and 9% of the total prison population; apart from three countries with very small national populations*, the highest levels are in Hong Kong-China (over 19%), Macau-China (almost 18%), Myanmar (over 16%), Bolivia, Qatar, Thailand and Vietnam (between 14 and 15%) and Kuwait (almost 14%).

The number of women and girls in prison has increased by 50% since about the year 2000. This cannot be explained in terms of the growth in national population levels: United Nations figures for the world population indicate that this rose only by 18% in about the same period.

The astonishingly sharp rise in recent years in the number of women and girls in prison, and the substantial variations in female imprisonment levels between neighbouring countries, between different regions and between different continents, should prompt policy makers in all countries to consider what they can do to limit the number of women in custody. Female imprisonment has a high financial and social cost and its excessive use does nothing to improve public safety.

With the publication of this latest edition of the World Female Imprisonment List, the Institute for Criminal Policy Research draws attention to the high and rapidly increasing numbers of women and girls held in penal institutions worldwide. These women and girls make up a small but growing minority of the total world prison population; they are an extremely vulnerable and disadvantaged group, and tend to be victims of crime and abuse themselves. The approximately 50% increase in numbers of imprisoned women and girls over the past 15 years should be of profound concern to governments, prison administrations and all who are committed to justice and penal reform.